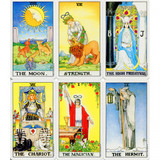 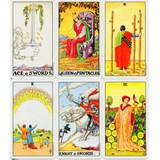 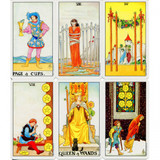 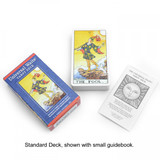 The luminescent colour tones by Mary Hanson-Roberts reveal details of the imagery that are appealing and conducive to readings and meditation.

Pack Information: 78 cards with a small booklet. This deck is based upon the original and only authorized edition of the famous 78-card Rider-Waite Tarot Deck.

Pocket Edition Information: The pocket set of Universal Tarot Cards are smaller than the standard size. The sizes of the cards can be seen below. The pocket set is great for those who prefer using smaller tarot cards, you can see the comparison between the two in the pictures above.

So here we have a genuine alternative to the Original Rider Waite deck. Some will never be swayed from the original version even if the new cards had holographic images and gold plated edges! But for those of you who hope for a little more colour may I present the Universal Rider Waite deck.

The images are exactly the same as the originals drawn by Pamela Colman Smith. The difference is that these cards have added colour and expressionism drawn by Mary Hanson-Roberts, creator of the Hanson-Roberts Tarot deck. The style of colouring is similar to the Hanson-Roberts - pastel, light shades, with a lovely bright quality to the images. The cards themselves are sound. I don't think I need to go into the validity or quality of the Rider Waite as it has proved itself by being the biggest selling deck of all time. But does this new colouring work?

For someone who has used the Rider Waite deck for a long time (like me) then when you look at the cards you realise straight away you are looking at a coloured in version and it seems there is something lost. But I suspect this not really to be the case. I think if you are just starting to read Tarot and you prefer the look of these cards to the Original Rider Waite then I think this will just become your deck and you will gradually become familiar with the character and subtleties of the deck as you would with any other. I think really it does boil down to preference. Which do you like best? I can't see any major shortcomings with this deck.

It must be bewildering for those who wish to explore the Tarot to decide which version to use. There are so many these days, and the wide variety of designs coming from the numerous spiritual or philosophical bases, makes it a hard choice. My advice would be to ask oneself whether it is the Classic Tarot that is desired, with its limitations and its complex images being borne by the Major Arcana alone. For some the historical significance gives the Classic Tarot a certain attractive quality that is characteristic of ancient documents such as the Bible, the Vedas, or even Chaucer. To work with a spiritual tool that is centuries old is to capture something of the mystical certainties of a different age. If a potential user of the Tarot does not seek to use the Classic version, then I would point that seeker to one of the versions of the Rider-Waite Tarot. For me it is not the rearrangement of some of the Major Arcana cards that is the significant factor, but the creation of different and distinct pictorial images for each of the Minor Arcana cards. This was a magnificent development and an approach by almost all the new Tarots ever since.

You might ask, then, what is the difference between the original Rider-Waite deck and the Universal Waite? Is one better than the other? Why is there a need for the later version? My answer to all of that is to point out that the original artwork on the Rider-Waite deck is excellent and most suitable for working with the Tarot for any purposes. I still have my old Rider-Waite and I have great affection for it. It has served me well for a number of years. It is simply, however, a little dated. It is a century now since Pamela Colman Smith drew the designs for the deck, under the initiative and supervision of Arthur Edward Waite. They are excellent images but do suffer a little from the heavy-handedness of the artist. The images tend to be outlined by a thick black line that sometimes obscures the detail of smaller objects, some of which are vital to the meaning of a card. The original artist also has such a fondness for black that some of the cards have a gloomier feel than I am sure was intended. The bottom right hand corner of the Death card, for example, in the original deck, bears a couple of characters that could be missed completely at first sight. The gender of one of them is also uncertain. The Universal Waite version of the Death card, however, has removed all the heavy black outlines, and replaced the black of the background with brighter colours. The character at the bottom right of the deck in the Universal Waite version is thus quite clearly a young female.

The only difference between the artwork of the two decks, as far as I can tell, is the colour. All the images are more or less the same but, in the Universal Waite, the dullness has gone and the detail has a much greater clarity. There is also a brighter feel about the deck, generating a more positive atmosphere. Another example of how the two decks differ is the Tower card. In the original deck there are mountains at the bottom of the tower, drawn in black and beige. It is only in the Universal Waite deck, with those images now in white, grey and a touch of blue, that those images are unambiguously mountains. There is now an icy look about them that makes them appear much more realistic. Also, the night sky behind the tower is now in two shades of dark blue, giving an attractive and appealing look to the night sky, rather than the simple, single tone blackness of the Rider Waite Tower card.

The artwork of the Universal Waite deck is simply superb. The colours are bright and cheerful. The detail is clear and effective. There is plenty of variety in the imagery and, this is important for me, the human figures are realistic and believable. I do not like my figures being too cartoon-like! There is something else, furthermore, that I think is important. Mary Hanson-Roberts, the artist who added these luminescent tones to the original images, has made no changes to the vesture of the human figures on the cards. They still look like characters from the Middle Ages. Believing that there is a mystical aura about the mediaeval period of history, that this was a time when things spiritual and supernatural were common occurrences, the artist allows the Tarot user to invoke the more spiritually trusting nature of those times to inspire us in the modern world. I very much agree with this approach. I do not like Tarot cards that bear images of cars, computers, and modern attire. When I use cards for divinatory purposes, or for meditation, I call upon a time when people were more in touch with their magical side, when the esoteric was part of the everyday.

The Universal Waite is a splendid deck. It is useful for all aspects of Tarot work, whether it be for divination or meditation or whatever. It is versatile and easy to read and easy to learn to use. The instruction booklet is short and uncomplicated. It does, nevertheless give a brief history of the Tarot that the instruction booklet of the earlier version does not include. Brief meanings are offered and just one spread is taught, the ten-card Celtic Cross spread. In times past I have often been overwhelmed by the different spreads in some decks, especially as some of them are quite complex. For the beginner this deck is most appropriate. It is not just a beginner’s deck, however. Although I am far more than a beginner myself, it is the deck I will use a good deal. When I have experimented with the many variations that are on the market I will always come back to this deck when I need to carry out a serious reading. In fact, I would recommend this deck to anyone wishing to work with something that is colourful, direct, imaginative yet something that sparks the creative skills of the user.