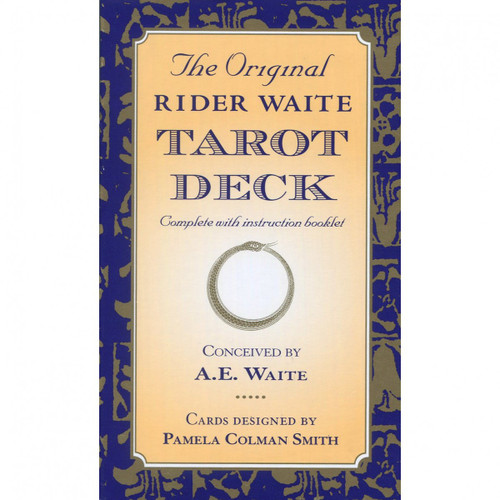 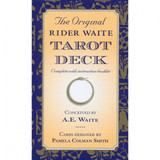 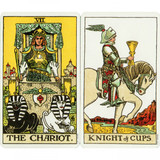 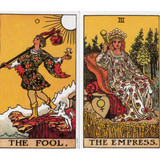 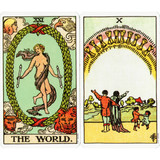 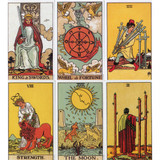 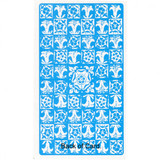 Pack information: 78 cards with a very tiny booklet with very little information in.

Authors: A. E. Waite & Pamela Colman Smith Arthur Edward Waite (1857-1942) was a leading scholar of the occult who produced the Rider Waite deck in 1910 in collaboration with artist Pamela Colman Smith. It has been the best selling Tarot deck of the twentieth century. Each card is rich in symbolism and clear in its design. It doesn't have the more modern appeal of some recently published decks, but there are many subtleties in these paintings, which means that years after starting to use this deck you will be noticing new details. Many Tarot books use the Rider Waite deck for their illustrations.

A great tarot deck for beginners and for advanced.

They say: The original and only authorised edition of the famous 78-card Tarot deck designed by Pamela Colman Smith under the direction of Arthur Edward Waite.

A. E. Waite - Designer of the Rider Waite Tarot

A E Waite – also known as Arthur Edward Waite – was the designer and co-creator of the now famous Rider Waite Tarot deck. The classic Rider Waite Tarot was the first tarot deck to fully illustrate all 78 cards, with detailed pictures on the minor arcana cards. The cards were commissioned by Waite and drawn by Pamela Colman-Smith, one of his contemporaries.

Waite was born in 1857 in the US, but was brought up from a young age in Britain, after his father died. Waite joined the Hemetic Order of the Golden Dawn, became a Freemason in 1901 and entered the Societas Rosicruciana in 1902.

His strong interest in all esoteric matters, such as divination, magic, Kabbalism, alchemy and Freemasony, led to him penning a number of books. These include the Key to the Tarot, The Book of Ceremonial Magic and A New Encyclopedia of Freemasony.

The Tarot is a specific system that has 78 cards in total. There are 4 suits (referred to as the minor arcana) and 22 other cards (referred to as the major arcana). Each card represents a specific energy. And each card, through the picture on the card, is trying to help you to feel the specific energy of that card. The reason there are so many different kinds of Tarot decks is that Different Tarot decks may present this energy in different pictorial form. We have lots of articles on Tarot.

The Rider Waite Tarot continues to be one of the most widely used Tarot decks, with various reasons for its enduring popularity, including its ready availability. When I was first interested to learn Tarot, such cards were not easy to locate and, if a high street bookstore was going to stock any, it was always the Rider Waite.

Teaching often centres on the Rider Waite cards, too; I first came across them at a local Tarot class. The teacher generously shared a selection of decks, for us to marvel at their arts and styles, but it was the Rider deck she used for teaching card meanings. In my own mentoring and training work, I have followed her lead and introduced students to the subject through the Rider Waite images; I even show them to attendees at my weekly Tarot talk, in a local health spa resort. I could use other decks, but I use the Rider Waite because it is the one people will have usually seen used in films and also because it presents an easy set of images to relate to. The cards are a good size, with clear images, depicting recognisable scenes and characters from life, without over-complicated detail.

People new to Tarot are often surprised to find they can immediately start applying basic interpretation skills with the Rider Waite. As an example, the Six of Cups depicts two children in a garden, with pots filled with white flowers around them. The boy smells the flowers in a pot that he offers to the girl, whose hand is outstretched, ready to receive them. Already, rather like in a captured moment in a photo, we can see some sort of ‘story’ here, one of innocence, gifts, love, kindness and growth.

Whilst the Rider Waite is not the first deck to have featured a full, figurative picture on every card, this was unusual for its time. Traditional decks frequently had ‘pips’ on the Minor cards (ie, the 40 numbered suit cards that form around half the 78 card deck). Pip-based Minors, on decks like the Tarot de Marseille, or IJJ Swiss show a geometric arrangement of markers, such as six cups, lined up in a uniform, oblong pattern.

The similarity to a decorative, playing-card arrangement is no coincidence; part of Tarot’s roots lie in Italian Tarocchi - cards designed for Tarocco, a trick-taking game. Tarot historians have recognised that the roots of some of the Waite-Smith cards go back as far as 1491, when the Sola Busca Tarocchi cards were created for an Italian family of that name, their images engraved on copper printing plates and the cards later hand-painted. When the Rider Waite was published, the process of getting pictures to card stock was comparatively easier. The ‘Rider’ part of the deck’s title comes from the London-based William Rider and Son, its first commercial publisher.

Credited on the box as the cards’ designer, the name of the artist who painted the images, Pamela Colman Smith, does not feature in the deck title. Neither did she receive a great deal of money for the job, despite being a successful, working artist, who had wide experience in creating illustrations for music sheets, theatre publications, poetry, folk literature, periodicals and even her own books.

In 1901, though, an author’s child’s story, featuring some of her best illustrations, was turned down and it was around then that she became more drawn to interests in occultism, mysticism and a spiritual approach to life. It was the poet, William Butler Yeats, from Smith’s theatrical and literary involvements, who introduced her to the Isis-Urania temple of the Order of the Golden Dawn - a secret, Hermetic society based on the model of a Masonic brotherhood, but which took the unusual step of allowing women initiates.

A E Waite, an occult scholar and book compiler, had joined the Golden Dawn in 1891. He favoured the mystical over the magical, but nonetheless had a vast knowledge of occult theory and practice, not least from translating the works of French, Kabbalistic occultist, Éliphas Lévi – whose works included major sections on esoteric Tarot. Waite’s bibliography in The Pictorial Key to the Tarot - his deck’s companion book - features detailed notes on consulted texts, from a wide range of significant authors, including Lévi, Court de Gebelin, Etteilla, Papus, Vaillant, Paul Christian and MacGregor Mathers.

Although Waite gave the Minor cards only divinatory meanings in that book, it is implicit in what he says within its pages that he was keen to incorporate detailed, spiritual and esoteric symbolism within the deck’s images. Waite was well aware of the power of symbolism in the cards and emphasised the use of intuition, in contemplating images, when he said: “The more numerical powers and bare words of the meanings are insufficient by themselves; but the pictures are like doors which open into unexpected chambers”.

Waite and Smith shared the Rosicrucian understanding of correspondences, an idea she used to paint pictures that came to mind, whenever she heard music (an ability known as synaesthesia). This, together with her theatrical involvements and travels to Jamaica, may all have contributed to the liveliness and broad range of imagery on the Rider Waite cards. Smith’s colour palette has its own system of correspondences; some of the Rider Waite ‘clones’, such as the Universal Waite, feature alternative colour schemes.

Certainly, a great gift to us is that the Rider Waite Tarot has come with a wealth of symbolism from a whole variety of spiritual and esoteric traditions, including Astrology, Alchemy, Numerology, Masonry and Jewish Kabbalah, which may be one of the reasons it continues to also appeal to more advanced students of Tarot. It is, of course, up to the person contemplating the cards to decide how their information is to be used: whether for greater self knowledge, spiritual growth, divine inspiration, divinatory answers or simply to look at past, present and future.