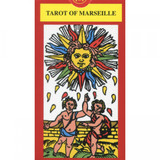 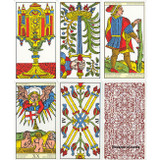 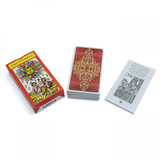 The name Tarot of Marseille does not indicate a single deck of cards but rather a series of iconographic models, which identify a type of Tarot deck.

At the end of the l600's, this type of card deck spread all over Europe, eliminating and replacing with rare exception (for example the Neoclassical Tarot of Lombardy), all regional
production and variants of Tarots. Within one century, the iconography of Marseilles was the most widespread and well-known. When the esoteric world began to dedicate itself to Tarots and study them, it was faced with this type of Tarot whose icons were transformed and explained in light of divinatory practices.

Strangely, the reason behind the extraordinary success of the Tarot of Marseille was predominantly economic. The iconographic model was without a doubt influenced by the Tarots of Paris, which in turn were heavily inspired by the Lombard ones. Nevertheless, the largest card industries of Europe were located in Marseille during that time. Thanks to that privileged position, some of the most important manufacturers of Tarot emerged and prospered: Arnoux (from 1790 to 1829), Bourlion (from 1753 to 1793), Conver (from 1760 to 1890), and Tourcaty (from 1701 to 1809). They were able to export card games and Tarots at extremely low prices and of a quality which was decidedly higher than the competition's. The logical consequence was that the use of Marseilles iconography became synonymous with quality and all manufacturers which were not in Marseilles adopted this new appearance in order to survive. Still today, the Tarot of Marseille are the ones used most for playing and, in Italy and France, also for divining.

In particular, this deck represents a typical example of the iconography of the Tarot of Marseille. This edition's exact 'reproductions' differ slightly since the colours were brought back to their original splendour (without the damage which time has inflicted on the original cards), the background was cleaned up, and the images were carefully reset in a sharper design. The final effect is not an exact reproduction of the ancient deck but rather a reconstruction of how the ancient deck would have looked had it been printed today.