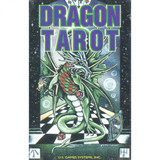 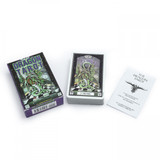 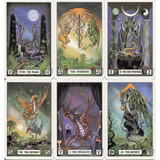 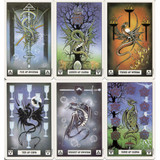 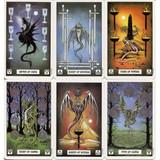 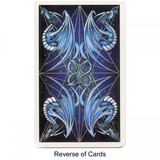 From the Deck: A spectacular 78 card deck capturing the perceptive powers of the legendary dragon. Enter the magical and mysterious world of the Dragon as you are led through a realm of different dimensions on a fantastic journey.

The Dragon Tarot represents the fulfillment of centuries of research into symbolism by mystics from the world over, bringing together the stories, myth, and magic from cultures as diverse as ancient Babylon, Egypt, and Imperial China, to the legends of King Arthur, St. George, and Siegfried.

Following traditional Tarot symbolism, the Dragon Tarot by Peter Pracownik and Terry Donaldson is also designed for adventuring into the realms of the imagination and discovering ourselves more fully.

An Excerpt from the Mini Instruction Booklet:
The Dragon Tarot deck draws upon the rich imagery of dragons in all their historical and mythological sources. The dragon is the ultimate symbol of knowledge and power; thus this tarot deck is the fulfillment of all the work the tarot carried out in previous times, leading upto the present day. In the Dragonland, you can almost reach out and touch the scaly skin of these wondrous creature, to pull yourself up on their backs and ride off with them into a fantastic world of imagination, myth and magic.

Pack Information: Comes with 78 cards accompanied by a mini booklet.

Authors: Created and Illustrated by Peter Pracownik under the guidance of Terry Donaldson

We say: This is a deck that we know many people love. The artist is Peter Pracownik, a leading fantasy artist, well known throughout the world for his art, album covers and even t-shirts. The designer is Terry Donaldson, author of Step by Step Tarot and other books. Terry and Peter were also the joint creators of the Lord of the Rings Tarot.

This is certainly not your run of the mill Rider Waite clone! On the face of it all the cards appear similar, as they all feature a dragon / dragons in some manner. But as you spend a bit more time with the deck you realise that there are many subtleties.

More About the Symbol of the Dragon
Western dragons are seen as being distinctly different from their Eastern counterparts. Legends originating in European countries portray dragons as giant winged fire-breathing creatures that are usually feared by humans.  Many stories tell of men who battle against all obstacles to fight the scary dragons, get past them and gain access to the riches and wealth hidden in dragon dens. The epic hero, Beowulf, is just one example of someone who attempted to fight a treasure-guarding dragon - although in his case he failed and was killed. The defining characteristic of a Western dragon symbol is that it represents power. Having an image of a Western dragon can help in expressing feelings of self-esteem, but they're also popular with dragon fans.

The Dragon Tarot by Nigel Suckling

The Dragon Tarot by Nigel Suckling