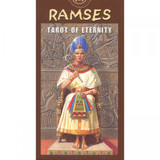 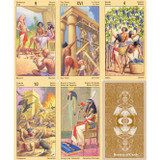 They say: This deck becomes part of the tradition of the "Egyptian-style" Tarot but confronts the task with a special kind of spirit. In most cases, in fact, the Minor Arcana of the old "Egyptian" Tarot are derived from the "Book of Thoth" by Etteilla and the Major Arcana come from "Les XXII Lames Hermetiques" by Pitois-Falconnier. Although the main French and Anglo-Saxon occultists, including famous leaders of the movement such as Papus, Mathers, and Crowley, did not create an explicitly Egyptian Tarot, they moved down the same road paved by Etteilla and Pitois and "dictated law" to the esoterists for nearly the entire twentieth century.

During the last two decades, however, various artists have devised their own new "Egypt-inspired" Tarot. Some have proposed an absolutely bizarre ancient Egypt which does not correspond to the historic reality. Others, directly inspired by the Egyptian culture, have copied, imitated, or modified sculptures, paintings, or drawings on papyrus. In most cases, however, works without soul were created, or rather, beyond their artistic value, the works do not have a coherent design. Naturally, this criticism is not to be extended to every new "Egyptian Tarot", some of which (very few, actually) possess both artistic and philosophical coherence.

The "Ramses - Tarot of Eternity" painted by Severino Baraldi, a master of historical illustration, belongs to this last category. This deck, which faithfully interprets my "story-board", concentrates on a well-defined era which begins with the accession to the throne of Sethi I (approx. 1304 B.C.) and ends with the sovereignty of Merenptah (1224 B.C.). Actually, the father and son of Ramses II open and close the series of the 22 Trionfi', or Major Arcana. At the beginning and at the end of this time span are the names of two characters who show up "outside of their time" given that they were supporters of a monotheistic religion which would have then changed the course of history; one was the heretical Pharaoh Amenophi IV, known better as Aken-Aton (who died around 1347 B.C.), and the other was the Egyptian Hebrew Moses (who died around 1265 B.C.). Apart from these two "outsiders", all of the 'Trionfi' refer to fundamental episodes of the very long existence of the "living god" User-Maat-Re Setep-en-Re ("Powerful is the truth of Ra, the Chosen One of Ra"), better known as Ramses II (1302-1224 B.C.). The main wives of Ramses as well as his most famous children, enemies, battles, etc., were therefore translated into "Trionfi figures".

Following the same principle, the series of number cards and Court cards focus on the daily life of the era of the great Pharaoh by proposing a series of illustrations which are as faithful to the historical reality as possible. A perfectly coherent deck concerning history and style was created thanks to the illustrator's exceptional knowledge as well. But beyond this certainly important aspect, a deck was to be created which would contain the fundamental elements of the Tarot's esoterism. Special attention was therefore paid to the layout of each figure which often "invisibly" contains the symbolism which all lovers of the Tarot expect to find.

In recent years there have been many Egyptian-themed decks appearing. Instead of being based on a random collection of tomb and papyrus images, this new deck begins with the accession to the throne of Sethi I (1304 BC) and ends with the reign of Merenptah (1224 BC).

Each Major Arcana card shows a different royal personage. The Fool depicts Aken-Aton, The Magician is Sethi I, and so on through to The World, which shows Shen. Some designs are full of imagination and wit. For example, instead of the usual image of a woman struggling with a lion, Strength shows a cheerful lady (Bent-Anat) standing in front of a large black statue of the feline deity Sett.

All the designs are reminiscent of pictures taken from a Victorian or Edwardian book, rather than being in the style of Egyptian tomb paintings or hieroglyphics. They are full of life, energy and vitality. The Minor Arcana show everyday life in ancient Egypt. Some of the images are influenced by the Rider-Waite and some show an entirely original and different view of the card. The Swords suit are particularly violent as they depict fighting, slaughter and executions.

The accompanying booklet contains a helpful resume of the historical period shown in the deck, as well as the usual card meanings and divinatory instructions.

The cards will certainly appeal to anyone interested in and fascinated by ancient Egypt. As the influence of the Rider-Waite is not always very obvious, I would not recommend them to complete beginners.