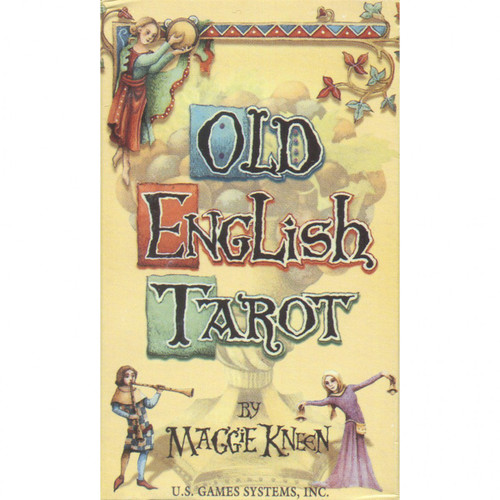 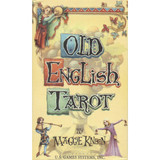 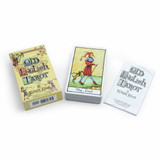 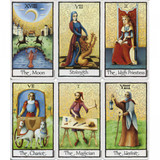 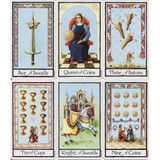 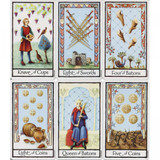 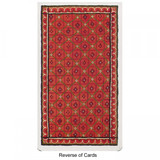 On the Box: Maggie Kneen's Old English Tarot is a gracefully designed 78 card deck with traditional scenes set in a panorama of medieval England. The inspiration for her creation of this Tarot was a medieval manuscript called the Luttrell Psalter, written and illuminated in the 14th century. With it's richly patterned, heraldic borders and distinctive colour schemes, it was the ideal reference source for the Old English Tarot.

I do love Tarot decks to have character. That is the one part of fairy dust that is always needed for a successful deck. Then a deck can become your friend, to accompany you along your way as you explore yourself and your abilities. That is one of the strongest parts of this deck. It seems to have character. It is tidy and clear in its presentation and its artwork has a warming quality.

I found some of the characters a bit dour and straight faced in their appearance though and some also lacked animation. For example the Knight of Swords lacks a certain conviction in what he is doing (this card is about keen focus) although other cards such as the ten of swords certainly did show animation with a sinking ship in a stormy sea.

One feature that I did like was the difference between the major and minor arcana cards. The minor cards are represented by the appropriate objects (eg. 10 swords) and below is a smaller picture of the depicted scene. Some may have preferred a full page of the picture but with the objects displayed above it made the difference between major and minor cards more noticeable. Some of the backgrounds are not as detailed as some other decks. In some ways I found the minor arcana (with novel little images) more unique than the major arcana cards which did resemble more the traditional representations of Tarot cards.

All these cards are beautiful and use colours which are rich, bold, and deep. Although the images are fairly straightforward, they are still detailed enough to be pleasing to an art lover. The backgrounds of the major arcana are a warm and creamy golden brown with very artistically drawn curlicues and this makes them stand out from the rest of the cards. The artist has obviously been influenced by older tarot designs, such as the Visconti-Sforza. For instance, The Lovers shows a young man trying to choose between two women, often representing virtue and vice, while Cupid hovers above them, waiting to let his arrow fly. This is typical of older tarot decks, and shows the duality present in the card's meaning. The court cards are also exceptionally beautiful. The artist has themed the colour and style of the clothing in each suit. For instance, the King, Queen, Knight, and Knave of Coins are all draped in robes of navy blue; whereas the members of the Court of Batons wear lighter blue and crimson robes.

Each Minor Arcana card has a small picture running along the bottom of the arrangement of objects. These little pictures are very decorative and reminiscent of images found on tapestries or in medieval books of hours. However, while some of the images had something to do with the meanings of the cards, others have less immediate relevance.

This may not be a suitable deck for complete beginners since some of the pictures on the Minor Arcana offer little help with the meanings. It is, however, recommended for those who have an interest in medieval Europe as well as those who enjoy decks based upon an older tradition.