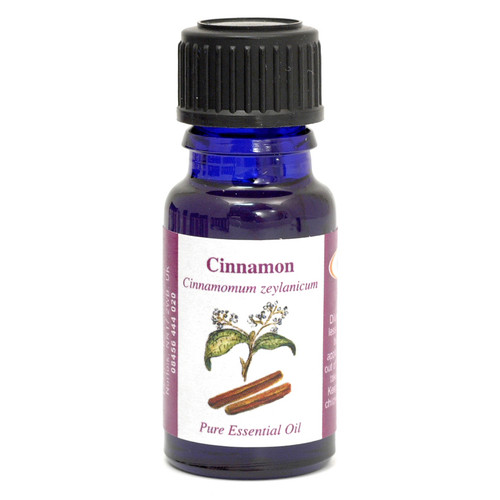 Earthy and spicy, this precious oil enlivens the senses while enveloping you in warmth, reviving your body and emotions

About Cinnamon Essential Oil: This powerfully intense, multi-purpose oil will lift your emotions, whether you're feeling depressed, fearful, lonely, stressed out, or lacking creativity. Its wonderfully rich, warming properties are invaluable for cold weather ailments, infections, and helping melt away aches and pains.

Description of Aroma: The scent of the oil is much richer and sharper than ground cinnamon. Peppery, earthy, spicy, bright, yet slightly woodsy and musky.

Properties Beneficial To The Mind, Emotions And Spirit: Cinnamon arouses the physical senses, and is believed to combat lack of concentration and stimulate creativity. It may relieve your stress and tension, emotional and mental fatigue or exhaustion, feelings of weakness, isolation, loneliness or fear, and is considered an aid for depression. Its aphrodisiac properties are reputably effective for impotence and emotional coldness. It is also believed to increase spirituality and psychic insight by stimulating the Crown Chakra, and when burnt as incense, cinnamon raises spiritual energy to a higher level.

Of Interest: Cinnamon has a long history of use in India, although it was first used medicinally and magically by the Egyptians and Europeans from about 500 BC. The Egyptians used it in the mummification process, and applied as a holy anointing oil an ancient Hebrew rituals. In mythology, the phoenix collected myrrh, spikenard and cinnamon to create the magic fire in which it was reborn. In ancient times it was regarded as a rare and precious substance, especially for temple incense. People who could obtain it used it in wine, pastries and sweetmeats. Cinnamon was also sacred to Dionysus, the Greek god of ecstasy.
In 2700 BC the Chinese emperor, Shen Nung, called cinnamon kwei in the Chinese pharmacopoeia. Around 4000 years ago it was traded between India, China and Egypt, and its medicinal properties were valued highly by the Chinese, the Egyptians - particularly for their feet and digestive systems - by the Greeks and also the Romans, who used it in their famous perfume, 'Susinum'. It is often mentioned in the Bible - Vavhe ordered Moses to use it in the fabrication of the holy ointment. As one of the most important drugs in the Greek and Roman pharmacopoeia, it was renowned for its stomachic, diuretic, tonic and antiseptic effects.

Around the 9th century cinnamon was used in mulled wine and love potions, and also given to women during labour, as it increases contractions. The cinnamon tree itself is said to be native to either Indonesia or Sri Lanka, where the oil has been produced for over 2000 years. Although it is found elsewhere, it was cultivated extensively by the Dutch in Sri Lanka in the 18th century. During the latter part of the 18th century England took over Sri Lanka, and the cinnamon industry became a monopoly of the East India Company. During this period it was used with such serious diseases as cholera and typhoid. In the past people have worn little boxes filled with aromatic herbs - one of which was cinnamon - to ward off contagious diseases. Today it is used widely in the food industry, cosmetics and perfumery industries. It is also valued highly in the pharmaceutical industry; cinnamon leaf oil contains 70-75% euganol, a phenol, and powerful antiseptic used in dentistry for mouthwashes, toothpastes, and solid or liquid soaps, for the purpose of eliminating germs. It is one of the most powerful anti-microbial essential oils available - viruses cannot survive in the presence of cinnamon oil.

Properties Beneficial To The Physical Body: Cinnamon has an excellent reputation for resisting viral and fungal infections, and other infectious diseases. It strengthens the heart and nervous system, and is helpful for digestive, respiratory, menstrual and dental problems. It restores heat to the body, and is therefore beneficial to the elderly, those recuperating from illness, and numerous bodily aches and pains. It is also apparently effective on warts!

Alternative Suggestions For Use: Cinnamon is said to be effective in treating wasp stings, snake bites and lice.

Essential Safety Precautions: It is no exaggeration to say that cinnamon is a powerful oil, so use with care and in moderation. It may irritate the mucous membranes, and is a strong skin sensitizer, so always use it well-diluted. Avoid in alcoholism, haemophilia, prostate cancer, kidney and liver problems, and if taking anti-coagulants. Very high doses might cause convulsions. Also avoid it during pregnancy.

Note: Only the oil from the leaf should be used, as the bark oil can be hazardous and is not recommended for topical application. (Robert Tisserand, Essential Oil Safety.) Cinnamon bark oil is on the restricted list of the International Fragrance Association (IFRA).

Do not use essential oils undiluted or take internally without the guidance of a qualified practitioner. The information contained here is for general interest and is not intended to replace medical diagnosis or treatment.

More About Our Own Brand Oils
We take great pride in the quality of our essential oil range.

Lower quality oils are available on the market but we continue to pick the best quality source for every oil. For example our lavender oil is "High Alpine" lavender from Mount Ventoux in the Pyrennes and the ylang ylang is the "complete" oil, not the ylang ylang II or III which come from a different stage in the distillation process. In the current climate essential oil prices on the open market have risen quite dramatically and some sellers are cutting quality. We have maintained quality, bought well and kept as competitive as always.

We do not buy anonymous drums of essential oils on the open market and we do not redistill lower quality oils to remake a “scientifically” higher grade oil that does not smell great (this happens sometimes with ylang ylang). We know the country and the growers of all our oils. Please be assured by the care we take with making sure our oils are great quality. You will smell the difference.