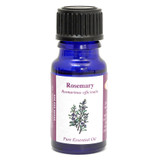 About Rosemary Essential Oil: Possibly the middle-aged executives best friend! Rosemary enlivens the brain cells, has an affinity for digestive system, helps with liver and gallbladder disorders, relieves physical aches and pains, lowers high blood sugar and is a physical and mental stimulant. Who needs a Ferrari?

Description of Aroma: A clear, strong, penetrating herbal scent. Woody and camphorous, and slightly reminiscent of eucalyptus or frankincense.

Properties Beneficial To The Mind, Emotions And Spirit: Let rosemary clear your mind of confusion and doubt. This oil stimulates the central nervous system, strengthening mental clarity and awareness. Its aromatic influences can stimulate your memory and help amnesia, aid you in overcoming mental fatigue and strain or apathy, encourage concentration and open your conscious mind. It may alleviate depression and eliminate negativity of all kinds, as it is said to preserve good humour and strengthen a weak ego.

Rosemary also strengthens against strong emotions and mood swings, and provides support in stressful conditions, helping you to see things through and evaluate possibilities. This oil is said to help bring the astral body under control of the vital centres, and is ideal for psychics, mediums and healers to maintain vitality and avoid depletion of energy while working. It is also a valuable tool for your centering and meditation practices - and is a wonderful antidote for the morning Grouch!

Of Interest: Sources vary as to the origins of rosemary, some stating Asia, others the south of Europe. Legend has it that the plant was first distilled in Arabia, and an Arab physician brought the art of distilling the herb to Spain. Whatever its origins, rosemary has been a well-known and greatly valued herb since ancient times, used extensively in medicine, cooking and ritual.

Philosophers, healers, physicians, biologists and naturalists, including Dioscorides, Theophrastus, Hildegarde of Bingen, Konrad von Gesner, Culpepper and Brunschwig, have all praised rosemary for its beneficial healing properties. It is considered second only to lavender in its importance in aromatherapy.

Rosemary is a member of the same family as numerous other oil-producing plants. Approximately 66lbs of plant material yields 1lb of essential oil. It takes its name form the Latin ros marinus, or sea dew, implying its fondness for water, and the plant is most at home near the sea. It certainly grows prolifically in the Mediterranean region. Long standing as an invigorating herb, it reputedly imparts a zest for life - the scent alone is said to preserve youth. Once known as 'elf leaf', it was used to attract feelings of happiness.

Remnants of rosemary plants have been found in Egyptian tombs. This culture burnt the plant as incense during healing and cleansing rituals. In Athens and Rome, rosemary was considered a sacred plant, given as a gift to humans by Aphrodite. In honour and gratitude they decorated their paintings of the gods with rosemary wreaths. Greek and Roman students wore such wreaths on their heads to enhance their studies, and no feast was celebrated without rosemary. It was also believed to give comfort to the living and peace to the dead.

In the Middle Ages the plant was highly prized and presented as a declaration of love. Alchemists during the Renaissance used rosemary to make the universal remedy, 'plant stone'. Also during Renaissance times it appeared in such forms as 'Water of the Queen of Hungary', a rejuvenating liquor also known as 'The Elixir of Youth.' The story goes that Queen Elizabeth of Hungary, a paralytic seventy-two year old suffering from gout, received the recipe from either an angel or a monk. After using the remedy she is reputed to have regained her health and beauty, to such a degree that the King of Poland wanted to marry her. Rosemary is used to preserve meat, so perhaps there is some truth to the tale.

In the 16th century, Charlemagne decreed that rosemary should be grown in all the imperial gardens. The 16th century German physician, Philipus Aureolus Paracelsus, graded the herb as the most essential component in his medicine. During the pneumonic plague epidemic of 1720 - 1721, rosemary was a valuable ingredient in Marseille vinegar, an effective preventative remedy. The leaves were infused in early liqueurs - fermented wines to which aromatic and medicinal plants were added.

The Moors believed rosemary warded off pests and planted it in their orchards. Rosemary branches were burnt as a fumigant in French hospitals - an old French name for the plant is incensier. It has been used to flavour wine and ale, put in clothes as a moths repellent, and hung as a Christmas decoration. The herb was placed in the docks in courts of justice to prevent the spread of jail fever. It was also one of the ingredients in classic Eau-de-Cologne. By the turn of the 18th century it was considered an official preparation.

In Hamlet, Ophelia says, "There's rosemary, that's for remembrance." In more modern times, Japanese researchers have obtained preliminary evidence that it does actually improve the memory. It can be used in small doses to treat epilepsy while, ironically, large amounts may cause epileptic type seizures. Something akin to homeopathy, perhaps. According to Rudolf Steiner, rosemary fortifies the vital centre and its action on the whole body.

Of all the plants in the plant kingdom, rosemary oil has the highest content of hydrogen, and applied externally can considerably increase warmth. The oil has been researched at Weber State university in relation to inhibiting bacterial growth. The leaves retard spoilage in salads, and work in a similar way inside the body. Arabs sprinkle the antiseptic powdered herb on the umbilicus of newborns.

Still used widely nowadays in cooking, rosemary has long been a symbol of friendship, loyalty and remembrance, and the flowers associated with love and marriage. Since earliest times folktales and legends have been spun around rosemary, said to attract elves and good ghosts, and banish bad ones. In modern times we could, perhaps, interpret this as driving out illness caused by bacteria and encouraging good health.

Properties Beneficial To The Physical Body: This highly antiseptic oil can help an impaired immune system, stimulate digestion; aiding the assimilation of digestive enzymes in the stomach, while helping liver and gall bladder complaints. It also aids the lymphatic system in eliminating waste products.

Particularly unique to rosemary are its anti-paralytic and nerve stimulating properties, which may help with temporary paralysis or impediments causing partial loss of the senses, such as speech, smell or sight. It can warm cold feet and renew vigor to tired, weak legs.

Rosemary's astringent and strong antiseptic properties are beneficial to numerous skin conditions, including oily skin and blemishes, acne, congestion and puffiness, burns, wounds, cellulite, sagging skin and dandruff. It might also benefit hair loss, as it may encourage new hair growth. Added to the final rinse it will make dark hair shine.

Rosemary Oil Blending Suggestions: Rosemary has a powerful scent, so use it sparingly when blending. You may like to try it in combinations with basil, bergamot, cedarwood, frankincense, geranium, ginger, grapefruit, lemongrass, lime, mandarin, melissa, myrtle, orange, peppermint and tangerine.

Alternative Suggestions For Use: Combine rosemary with oils such as hyssop, frankincense and juniper to accompany your meditation. Its physical and mental stimulant properties make it a good choice for a morning bath, and for eliminating aches and pains it is ideal after a long, tiring day.

Essential Safety Precautions: Avoid this oil in pregnancy, and with high blood pressure or if prone to epilepsy. In extreme doses it may cause seizures, spasms or nausea. Rosemary may neutralize the effects of homeopathic remedies. People prone to asthma may find the strong scent aggravating, and it can irritate sensitive skins if applied undiluted. Its stimulating qualities would be undesirable if you are trying to sleep.

Do not use essential oils undiluted or take internally without the guidance of a qualified practitioner. The information contained here is for general interest and is not intended to replace medical diagnosis or treatment.

More About Our Own Brand Oils
We take great pride in the quality of our essential oil range.

Lower quality oils are available on the market but we continue to pick the best quality source for every oil. For example our lavender oil is "High Alpine" lavender from Mount Ventoux in the Pyrennes and the ylang ylang is the "complete" oil, not the ylang ylang II or III which come from a different stage in the distillation process. In the current climate essential oil prices on the open market have risen quite dramatically and some sellers are cutting quality. We have maintained quality, bought well and kept as competitive as always.

We do not buy anonymous drums of essential oils on the open market and we do not redistill lower quality oils to remake a “scientifically” higher grade oil that does not smell great (this happens sometimes with ylang ylang). We know the country and the growers of all our oils. Please be assured by the care we take with making sure our oils are great quality. You will smell the difference.