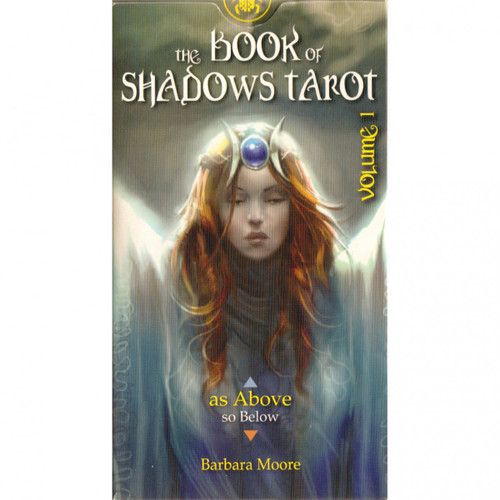 They say: An unbound magical book filled with wisdom, guidance and lessons,made with images and not with words. This Tarot deck, "as above", Volume 1 of the Book of Shadows Tarot, focus on the Teachings and Universal Energies present in the world. The Book of Shadows is a very personal journal kept by many witches, Wiccans and practitioners of Neo Practitioners as a record of their mystical and spiritual journey, including ritual practices, spells, Tarot readings, crystals and astrological studies.

I have encountered and made use of a number of Tarot decks that use the imagery and ideas of witchcraft, paganism or ancient wisdom. Some of them have worked really well for me and some of them worked less well. I was intrigued as to how this one would be different. The Book of Shadows Tarot, by Barbara Moore, was a very pleasant surprise. Picking up the deck and browsing through it did not initially attract me. On further examination, and by using it for meditation and for divination, however, I began to get a real feel for it. I am not always drawn to Tarot decks that use radically different imagery and basic meanings. The strong point about this deck is that Barbara Moore’s creations are well justified and well considered. There are clear indications that the deck is intended “…to hold and express modern Pagan spiritual teachings, or Wicca.”

In the Major Arcana, all the cards are renamed. The original numbering is retained, however, and the instruction book makes clear the parallel figure used in more traditional Tarot decks. Within the Major Arcana is to be found, for example, Spellcasting (Strength), the Yule (Death), the Circle (the Hanged Man) , as well as all eight of the pagan festivals. A favourite card of mine is Card XX – Initiation (Judgment). This is a picture of a person, probably a woman, whose back is turned to us. It is dark and the person is in a sacred circle. She is dressed in black, looking upwards, her arms outstretched. Above her in the sky are two figures, the god and goddess. I just find this a more attractive card than the traditional one of Judgment. It feels gentler and more spiritual.

The cards of the Minor Arcana are equally creatively designed. The suits depicted are Earth (Pentacles), Air (Swords), Fire (Wands) and Water (Cups), although the instruction book makes clear the traditional parallel suits. What is very useful and very imaginative is the use of a subject for each of the Minor Arcana cards, all of them explained in the book. For example, the Eight of Air represents “Meditation”, the Four of Water indicates “Bridget and Healing”, whilst the Ten of Fire is concerned with “The Stars.” The “royal” cards are named “Elemental”, “Maiden”, “Mother”, and “Crone”. I did wonder whether a predominance of female archetypes may have been a problem but it was never an issue for me. After all, there is no reason why a female archetype cannot be made to work for a man. In some ways, there can be advantages in using mainly female archetypes in cases where there is a need for more feminine elements in one’s often unbalanced life.

There are some aspects of this deck with which I take issue. I have found that the size of the deck, although the cards are easy enough to handle, necessitates a small instruction book. Thus, the usual “little white book” is included. As the work is written in five languages there is thus, in my view, insufficient space to include all that needs to be written. This is an issue I have with a number of decks, especially those in the Lo Scarabeo series. This deck justifies more space as the ideas and sentiments expressed within it deserve further expression.

The limited space in the book also impacts upon the spreads that Moore is able to offer. In fact, there is only one spread mentioned, the five-card New Moon Spread. This has worked well enough for me, and there is no reason why the traditional spreads or those from other radically designed decks, cannot be used. This deck lends itself also to experimentation and I have invented my own circle deck, an arrangement that seemed to suit the pagan theme.

One thing that intrigues me about this deck is why it is labelled as Volume I. Apparently there is a second volume that continues the theme of “As above, so below.” This volume deals with the sub-theme of “as above.” The second sub-theme of “so below” is to be featured in the next volume. Volume I specifically focuses on “…the Teachings and Universal Energies present in the world.” There is no explanation of why there is need for a second deck in the series. I have struggled to work out what the next deck can contain that is not discovered in this one. My curiosity has been sparked, however, so perhaps others will be similarly more anxious to acquire the second deck.

If I am asked as for whom this deck is intended I would suggest that it is the more experienced user, someone who has used a more traditional deck and who is anxious to extend their range of Tarot possibilities. One must remember, however, that there are different types of Tarot user and, for those not intending to use the cards for divination purposes then this deck is as good as any and better than most. As a means of meditation or reflection, especially by drawing just a single card, this deck can initiate powerful ideas and suggestions. It compares very favourably with other decks coming from a similar tradition. Fergus Hall’s Tarot of the Witches has strange cartoon-like pictures for the Major Arcana and traditional basic images for the Minor Arcana, all of which, though usable, have nothing distinctly witch-like about them. The Tarot of the Old Path is an excellent deck for those who seek to use female energies, but with more traditional Tarot images. The Sensual Wicca Tarot is another excellent production that deals specifically with relationship issues, though a little too “spicy” for some.

The Book of Shadows Tarot has certainly won me over. I did not think that another Tarot with a witchcraft theme could rival the others in that field in their distinctiveness. Well, it just goes to show that, in the Tarot world, the well of creativity never runs dry!

The Good Tarot by Colette Baron-Reid