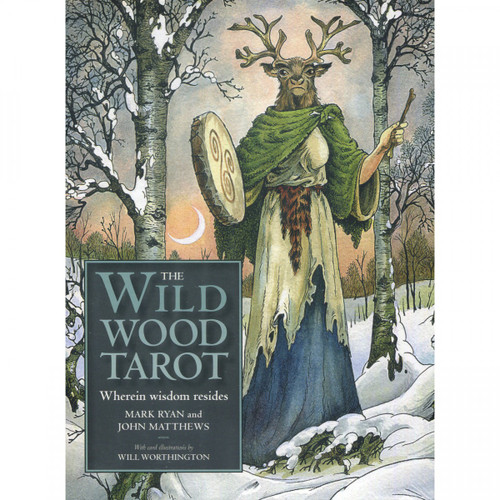 Wherein wisdom resides - For those who love the ancient woods

On the Back of the Box
Enter the Wildwood and you will experience a world of myth and nature, a place of great simpilicity and deep understanding. To walk among the age-old trees is to journey back in time when we were different and our relationship with ancestral knowledge was as natural as breathing.

Few themes touch us as deeply as this. In The Wildwood Tarot Mark Ryan and John Matthews introduce us to the classic forest archetypes of the Green Man and Woman, the Archer, the Hooded Man and the Blasted Oak. There are symbolic animals too, like the Hawk, Hare, Otter and Wolf, creatures that once walked alongside us in the greenwood and whose spirits still resonate today. Will Worthington's rich and vivid images bring this world to life and make it possible to feel the magic and power of the wildwood.

The Wildwood Tarot draws inspiration from pre-Celtic mythology and a belief system steeped in shamanic wisdom and forest lore. Based on the seasonal rhythm and festivals of the ancient year, it enables us to connect with a long-lost world - one that can now help us make sense of our own.

I am a great collector of tarot decks and have numerous versions on my shelf. I have comic ones, colourful ones, simple ones, circular ones, dark and sinister ones and rude ones. I have now lost my sense of surprise at what may come up next.

Of all my decks, however, there are only one or two that I use regularly in any serious way. I did not think that I would meet a new deck that I would fall in love with. Yet I was mistaken. This Tarot deck is simply divine. It is so imaginative yet is not gimmicky. It has so much that is new in imagery yet does not lose a sense of itself. There is nothing seriously negative I can find to say about it. Will Worthington’s artwork is just delightful with every single card in itself being a masterpiece.

The deck is a re-working and a redevelopment of Mark Ryan’s The Greenwood Tarot but with extra new insights and some different imagery. Ryan himself describes this tarot as “a unique, fresh and re-energised version of the Greenwood Tarot.” I am not familiar with the original tarot, but the Wildwood Tarot has surpassed all my expectations.

The whole notion of the use of the deck being a sort of journey into the mystical forest is just so engaging. The Major Arcana bears images of characters and concepts such as the Wanderer (instead of the Fool), the Shaman and Seer (instead of the Magician and High Priestess). In there can also be found the Green Man, the Hooded Man, the Moon on Water and the World Tree.

One of my favourite cards is that of the Guardian. Usually a much maligned figure, known as the Devil in traditional decks, here is a multi-faceted character who brings us dark riddles and challenges, but also a mocking humour. This may seem a strange alternative to the “evil” creature associated with traditional decks but his presence allows us to be disconcerted as we look at ourselves, instead of being stultified by hysterical fear.

The book that accompanies the deck is a masterpiece in itself. There is so much of value to read in it. This is no “Little White Book.” There is within it an essay by Mark Ryan, tracing the history of the new tarot from the original Greenwood Tarot, justifying the need for something new owing to a changed perception following growing awareness of ecological threats and a renewed evaluation of the natural world. John Matthews provides us then with a statement of his vision and his commitment to this enhancement of the original project. Matthews’ work is always so profound and studiously researched that his “imprimatur” deserves some attention.

Part One of the book, “Into the Green” is Mark Ryan’s introduction, yet what an introduction! Here is a twenty page explication of the Robin Hood mythos and how it speaks to us through our non-rational selves. He talks of archetypes and how we can marshal the characters of the forest to defend us in the outer forest of life. There is an enormous amount of philosophy here and how the cards can give us access to it. Ryan’s subsequent rationale of the Wheel of the Year is one of the finest I have read and a very clear basis for the detailed explanations of the cards themselves that appear in the following Part Two, “The Path Through the Forest.”

Part Three deals with the practical use of the cards and working with the spreads. As with any other tarot deck it is possible, of course, simply to make use of the traditional spreads. The strength of this tarot, however, is that there are three other spreads that are peculiar to itself. The Pathway Spread uses just three cards whilst the Bow Spread, laid out in the shape of a bow, uses seven cards, the element of each being designed “to send an arrow to the heart of the problem.” This is the spread I have found the easiest to use. The third spread is the World Tree Spread, using eight cards, but is intended to deal with situations requiring a broader and more comprehensive review. I have used this spread and it works magnificently.

Ryan’s humility is such, however, that he is able to state early on that the best advice he ever received about tarot was, “Read the book, meditate with the cards, then put the book away and do your own thing!” I have tried this tarot many times and have discovered that the ways it can be used are infinitesimal.

I think this deck is absolutely first rate. It is complex to use in many ways but it is worth putting in the work. It has become a well-loved and well-used instrument in my own spiritual life. It is a useful tool for divinatory purposes, a very useful one, but has other uses too.

Drawing a different card each day, either randomly or by choice, is a very effective basis for meditation or reflection. Simply looking at the cards and reading their meaning can be a worthwhile means of educating oneself in our esoteric history and traditions.

One use of the cards that I find agreeable is to choose a card and reproduce it in my own way, producing in fact by own piece of art work. The symbolism of such cards thus becomes even more impressed upon my consciousness. As you can see, I am seriously devoted to this deck. It is a major tool in working with the natural world, with the powers of the other world, and with the powers within oneself. It is, in fact, the best Tarot deck I have worked with and I hope it gets used as much as it deserves. Well done Mark Ryan, John Matthews and Will Worthington!