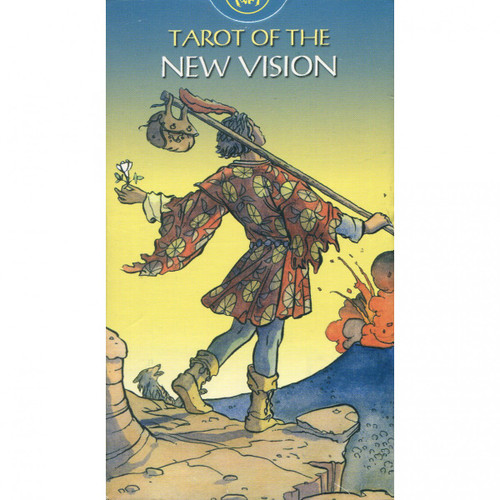 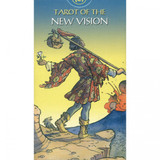 They say: The figures of this deck were inspired by the Rider-Waite-Smith tarot, designed and described by renowned English occultist Arthur Edward Waite for the young painter and illustrator of books, Pamela Colman Smith, who created them in 1909. This tarot, without a doubt the most famous in the world, has been the object of many attempts at imitation and was the source of inspiration for numerous decks that are still on the market.

For the first time, the images created by Smith for the New Vision Tarot were designed by rotating the perspective 180 degrees (the figure is no longer seen from the front, but rather from the back). What the depicted figures have in front of them or behind them can therefore be discovered (depending on the angle). This is not simply a figurative peculiarity but an ulterior extension of meanings. Some symbolic elements, where possible, were also added in order to come closer to the traditional symbols.

One of the greatest difficulties when the new images were designed was the angle of the Kings and Queens seen from the back on the throne. The problem was identical for many Major Arcana such as the High Priestess, the Emperor, the Hierophant, the Chariot, and Justice. While realizing this project some of the cards required 'artistic' license for the enlargement or reduction of the size of the figures and objects in relation to their original position. For some cards, for example the High Priestess and Justice, the edge of a curtain located behind them was allowed to fall in order to make the main character more visible.

People who currently use the Rider-Waite-Smith tarot now have a convenient deck that represents its complement and its completion. Thanks to the New Vision Tarot, a new and enlarged image of each card is possible for more profound reflection. As if wanting to emphasize the coincidences of life, in order to illustrate this tarot two twin brothers were chosen thanks to their modern and effective colors with a clean line: Raul and Gianluca Cestaro. A man and his twin, a coin and its other side, a person and his opposite point of view, the Rider-Waite tarot and this deck: All for broadening knowledge... and awareness.

I do like this deck. I love the new insights that are contained in the cards. For instance in viewing the man standing in the 3 of Wands you get a whole new view of a wagon train arriving behind him, and you cast your mind back to the 3 of Wands in the Original deck and know that in the original he is looking out over water to horizons new, and it makes sense that a wagon train is arriving behind him as the 3 of Wands is about looking to these new horizons with hope, knowing and hoping you will end up where you would like to be. Having the wagons implies that you have upped camp and are looking for something new, but you have a lot of support.

I find this deck especially useful on those cards that you "know" what they mean but you cannot "feel" them as strongly as other cards. That extra bit of insight or extra symbol can help move you along. I am not saying some of the traditionalists will approve, but don't we need something different every now and again to jar our vision? I think the insights and extra information is well conceived.

My instant reaction to the Tarot of the New Vision is to say that it is a deck best suited to those have been reading the Tarot for a while. But then on second thoughts I am not so sure, because who is to say that drawing the depictions of the Original Rider Waite from completely the opposite direction offers anything less important than if drawn front on. I think it would make for an interesting discussion point in a Tarot class, comparing Original Rider Waite cards with the New Vision cards.

Tarot of the New Vision Book by Giordano Berti