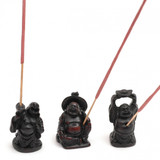 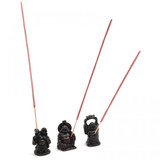 These solid resin Thai style Buddhas feels smooth to the touch and solid. This item is traded fairly with smaller suppliers in Thailand, giving a fair price for the items.

Size of Buddha's: Group of three Buddha's about 5 cm by 3cm

More About the Symbol of the Buddha
Buddha means "awakened one" or "the enlightened one". The Buddha began life in the 6th century BC as Siddhartha Gautama, the son of a tribal leader, in an area that is now probably Nepal. From this privileged position, he began to wonder about the meaning of life and death and of growing old. It is said that one day he met a sadhu, (a holy man), who had given up all material possessions to go forth in search of truth. This must have been a major factor in inspiring Siddharta, at 29, to leave behind his comfortable life - and his wife and child - in order to find the truth.

He went in search of teachers, illuminated ones who could give him the knowledge he sought. He would absorb their teachings and then move on, valuing what he had learned but always feeling that there was something more, something that he was missing. For years he practised a programme of austerities, which in many ways amount to self-torture, during which he became weaker and weaker through long periods of fasting. He began to accumulate disciples, impressed by his great feats of asceticism. Eventually he realised that his austerities were not bringing him any closer to the truth, and he began to eat again. After nearly killing himself through lack of food the Buddha realised there was a middle way between deprivation and indulgence.

Six years after leaving his home and family, he came to a place now known as Buddha Gaya, and stopped under a tree by a river. He started to relax his whole being, and stopped pushing so hard for the truth. Through meditation, he plunged deeper and deeper into his super-consciousness. After 49 days under the tree it is said he attained enlightenment where he understood the root of all suffering and also what steps were needed to end suffering.

To wear, carry or have around you symbols of the Buddha reminds us that total peace and bliss are possible. It reminds us of the words that hint at what enlightenment feels like: illumination, knowing, peace, calm, clarity, wisdom, profound love, and bliss.