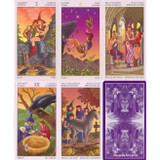 They say: Old or young, a witch is hiding in every woman. A wonderful, free, and happy being capable of communicating with animals, caressing plants, playing with crystals, feeling, sensing, concentrating, and using the force of Air, Water, Earth, and Fire. From the classic pointy black hat and unfailing broomstick to jeans and roller skates, the way a witch dresses might change but the wisdom, strength, symbols, and tools - those remain unaltered: The same power, the same faith in nature and its laws, the same awareness of belonging to a whole from which support, protection, information, and good advice may be drawn.

The Witch 'reads' the web of life with the Tarot to choose her path and answer the questions that are part of her travels. The Witchy Tarot is for the young at heart, new to the road of life. We offer it with our Blessings for a safe and happy journey.

More About the Symbol of the Witch
Being a witch and practicing witchcraft is a way of life, not a religion. It's based on a belief in nature and the desire to follow the Old Ways. Witches recognise the divine within themselves and have many strands of belief and tradition. They're ordinary people, not scary beings with strange, mystical powers, and have the same abilities as everyone else. However, they encourage the development of extra skills, such as spells, healing and psychic abilities, and it's these activities that are often misconstrued.

Being a witch hasn't always been an easy task. From the 13th to 18th centuries in Western Europe, witches were regarded as being people who misused supernatural powers. They were often seen as servants of the devil, with a scary and harmful way of life. Witches became persons to be fearful of and many suffered the trauma of being burnt at the stake for their beliefs and abilities. When the witchcraft hysteria was in full swing, witches got blamed for every unexpected occurrence, from crop failures, to droughts, floods, accidents and numerous natural disasters.

Witches beliefs are diverse and depend on the particular tradition they follow. However, some common principles include:

The three fold law - that one's actions return three times over. For example, an act of kindness produces three times much as kindness.

The idea that everyone is responsible for his or her own actions.

Just as with other beliefs, witches have their own special celebrations. There are eight major events in the year, termed sabbats (Beltane, Litha, Lammas, Mabon, Samhain, Yule, Imbolc and Ostara).

Despite many misconceptions, witches don't fly broomsticks and aren't always accompanied by black cats, although many of course do choose to have furry feline friends!

This deck has a bright, highly coloured, Disney cartoon quality that will appeal to its target audience of girls aged from 8 to 18. Most of the people depicted in these cards are young, lithe and beautiful girls. Dressed in mini skirts, corsets, bikinis, hot pants and thigh boots, they all seem to have difficulty keeping their clothes on! The few men and boys that do appear are all boyishly young, muscled and usually dressed in snugly fitting shorts or jeans. Most of the Major Arcana keep their original titles and expected images. There are a few exceptions. For example, The Magician becomes The Witch, The Hanged Man becomes The Hanged One and The World becomes The Universe. All the Major Arcana have a subtitle relating to a piece of witchy paraphernalia in one of three categories: Tools, Plants and Animals. So, The Witch (Magician) has an athame, The Hierophant a walnut tree, The Hanged One a bat and so on.

The Minor Arcana suits are changed from Cups, Pentacles, Wands and Swords to Cauldrons, Boulders, Flames, and Broomsticks. The court cards are very different from their usual form, Pages become Celebrations, Knights become Moons, Queens become Goddesses and Kings become Trials. Overall, the cards traditional meanings are not always apparent from the images. This means that the deck will mainly appeal to young girls who want to look up the cards meanings in the booklet, rather than learn them. However, the deck should be a good introduction to Tarot for girls who can successfully relate to the lively images.

The Light Seer's Tarot by Chris-Anne