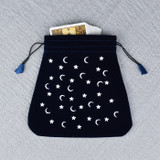 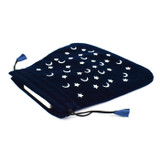 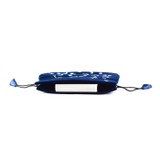 This bag is suitable for all standard sized tarot cards. Ie. Rider Waite cards, Mythic Tarot, Sharman-Caselli deck etc. These bags suit all Tarot cards sold on Holisticshop.co.uk. They are also suitable for all the angel cards we sell on the site such as all of Doreen Virtue cards. They can also of course be used for other activities such as keeping crystals safe or other precious objects.

Material: A rich dark blue velvet bag embroidered with silver coloured thread in moon and stars design. The inside of the bag is lined with dark blue satin. When you pull the two strings at the top of the bag the top pulls together keeping your cards safe.

More About the Symbol of the Moon
Throughout many traditions the sun represents the father and male principle and the moon the mother and feminine principle. The energy of the moon is intuitive, deep, subtle, feminine and psychic. To say this is a feminine energy does not mean to say this energy is just for women. Men and women have their female and male aspects. We all develop them both.

The moon is also associated with clairvoyance and knowing without thinking. To use the energy of the moon does not involve conscious thought. So to wear or have around you the symbol of the moon is to state your universal intention to use your intuition, to simply go with what you feel and to know that to do this is for your greater good.

The moon has different phases and throughout these phases it affects us in different ways. For example the full moon represents illumination, unconscious made conscious and all can be seen. The crescent moon symbolises new beginnings and the making of dreams into reality. Because of this cyclic nature the moon it is also connected to rebirth and how our true essence really is immortal.

More About the Symbol of a Star
When many of us in the west think of the star as a symbol the first one that comes to mind is the star that announced to the wise men the birth of Jesus Christ. As such we connect the star with hope and prophecy and we begin its association through countless civilisations with mysticism, cosmic forces and universal mystery. The Mayans and Egyptians are known to have mirrored star constellations in the arrangement of their pyramids and some Native American tribes see the stars as the souls of their ancestors watching over them.

The star is a symbol of something much greater than ourselves because it has a connection with the very foundation of life, with the very beginnings of the universe, and how creation actually started. The mystery lies in how light came from darkness. In many traditions there was a blackness, a void, and from this void creation sprang. Stars and suns are widely seen to be part of this moment. The star signals a belief in the ability of something to come from nothing - a belief in miracles. A star is like saying 'yes' to life. It is like a positive affirmation, saying that you are always open to the unexpected.

More About the Symbolism of the Colour Blue
Colours can affect our physical, mental, emotional and spiritual states, both consciously and unconsciously. We can use colours to help us feel better, to inject an element of vitality into our life, or to calm strong feelings and promote a sense of peace and relaxation.

The colour blue is typically associated with a range of emotions and states of being including: calmness, purity, truth, wisdom, depression and peace. Different people perceive colours in different ways, so you may have other associations, which are equally valid.

In Buddhism blue is linked to wisdom, and in Hebrew traditions it's associated with mercy. Both Christ, and the Virgin Mary, have both been depicted wearing shades of blue, representing their detachment from worldly goods, materialism and possessions. Blue is the colour of the sky and as such is associated with a sense of peace, freedom and calmness.

The ancient Egyptians regarded blue as being the colour of truth, and the images painted on the walls of their tombs were on a sky-blue background. It's also a colour that's been linked to scores of gods, particularly sky gods, such as the Egyptian Amun, the Greek Zeus, Roman Jupiter, the Hindu Indra, Vishnu and his incarnation, Krishna (who was said to have blue skin).

When people are feeling low in spirits or depressed they're often said to be, "feeling blue." It's thought this phrase may stem from the twilight blues songs sung by African slaves whilst being held captive in North America. In the case of the chakras, blue represents the throat chakra.