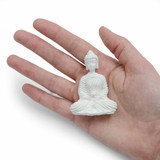 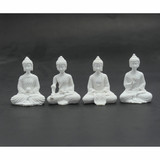 This set includes four of the Dhyani Buddas, these can be placed around the house and used to bring good energy into your home, or as Feng Shui house protection.

In Vajrayana Buddhism the Five Dhyani Buddhas or the 'Five Great Buddhas' are representations of the five qualities of the Buddha. There are different associations that go along with each of these Buddhas including a different season, wisdom and cardinality - in this case, which cardinal direction the Buddha normally faces. (These are all included in the description below). There are only four within this set as these are associated with the main seasons & cardinalities (i.e. The fifth Buddha represents the 'Centre' and does not carry a season).

The Dhyani Buddha Akshobhya is usually represented by exhibiting the Bhumisparsa Mudra (spiritual gesture, or pose). This gesture can be translated as 'Touching the Earth' or 'Calling to Witness the Truth' Mudra, where the right arm is pendant over the right knee. This figurine is this set however has a similar pose to the Buddha Amitabha (Fourth Buddha), and exhibits the Dhyana Mudra where the two palms are folded face up on top of each other and are lying in his lap. This gesture is said to promote the energy of meditation and deep contemplation.

Akshobhya's symbol is a sceptre/Vajra, (a Sanskrit word meaning both thunderbolt and diamond).

Suggested placement: At the centre of your home, or at the main entrance.

Ratnasambhava usually depicts the Varada Mudra, this is the gesture of charity and gift bestowing. His lift palm rests on the lap with an open palm, whilst the right is extended downwards. The Varada Mudra is said to express the energy of liberation and compassion whilst offering acceptance.

His symbol is the Jewel; within both Hindu & Buddhist traditions this is said to be the equivalent of the philosopher's stone (a wish-fulfilling jewel)

Suggested placement: In the home office, or library/study.

The Buddha Amitabha is shown with the Dhyana Mudra; both hands are placed on the lap with the right hand on the left, fingers fully stretched and the palms facing upwards.

His symbol is the Lotus; this usually represents rebirth, faith and beauty.

Suggested placement: In the centre of the home, study or a meditation room.

The fifth Dhyani Buddha Amoghshuddhi depitcs the Abhaya Mudra, is this gesture, the arm is elevated and slightly bent, the hand is lifted to the shoulder level with the palm turned outwards and the fingers are extended. This pose usually represents protection or fearlessness.

Suggested placement: In the main entrance of the home, or the living room.

Size of Buddhas
Total length is roughly 5.5cm, whilst the width at the widest point is approximately 4.1cm. There may be a very small amount of variation between Buddhas but the sizing is usually pretty standard.

Made From: White Resin

More About the Symbol of the Buddha
Buddha means "awakened one" or "the enlightened one". The Buddha began life in the 6th century BC as Siddhartha Gautama, the son of a tribal leader, in an area that is now probably Nepal. From this privileged position, he began to wonder about the meaning of life and death and of growing old. It is said that one day he met a sadhu, (a holy man), who had given up all material possessions to go forth in search of truth. This must have been a major factor in inspiring Siddharta, at 29, to leave behind his comfortable life - and his wife and child - in order to find the truth.

He went in search of teachers, illuminated ones who could give him the knowledge he sought. He would absorb their teachings and then move on, valuing what he had learned but always feeling that there was something more, something that he was missing. For years he practised a programme of austerities, which in many ways amount to self-torture, during which he became weaker and weaker through long periods of fasting. He began to accumulate disciples, impressed by his great feats of asceticism. Eventually he realised that his austerities were not bringing him any closer to the truth, and he began to eat again. After nearly killing himself through lack of food the Buddha realised there was a middle way between deprivation and indulgence.

Six years after leaving his home and family, he came to a place now known as Buddha Gaya, and stopped under a tree by a river. He started to relax his whole being, and stopped pushing so hard for the truth. Through meditation, he plunged deeper and deeper into his super-consciousness. After 49 days under the tree it is said he attained enlightenment where he understood the root of all suffering and also what steps were needed to end suffering.

To wear, carry or have around you symbols of the Buddha reminds us that total peace and bliss are possible. It reminds us of the words that hint at what enlightenment feels like: illumination, knowing, peace, calm, clarity, wisdom, profound love, and bliss.

Where Light and Dark Meet T-Shirt