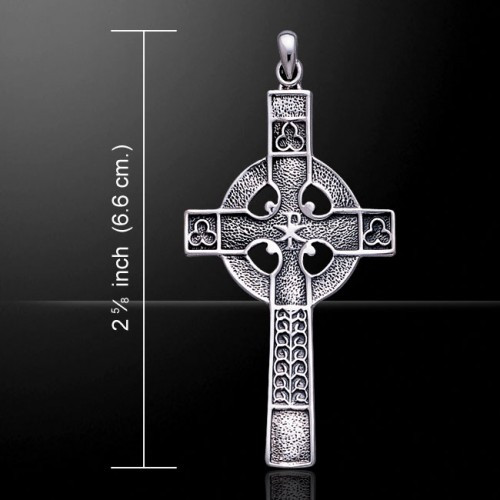 The Celtic cross is similar in essence to the Christian crucifix, with the added addition of a circle surrounding the point where the four lines meet in the centre. It gets its name from its heritage, where it was found in parts of England, Ireland, Wales and Scotland where early Celtic Christianity thrived.

The four "arms" of the cross have been interpreted as representing the four elements of earth, air, fire and water, the four parts of humans, namely mind, soul, body and heart, or the four directions of the compass, north, south, east and west. The distinctive circle on Celtic crosses is believed to represent wholeness, and the female energy of the earth, whereas the arms of the cross are the male energy. Joined together, they signify the moment of being when the two energies are brought together in harmony and balance.

Another meaning for the circle is that it may stem from earlier cultures, where circles were used to represent the moon and a cross and circle together symbolised the sun. If that was the case, the Celtic cross may also have been an early Pagan symbol of the sun.

As such, the decorative cross can be adopted as both a symbol of Christian belief and of one's deeper spiritual roots.