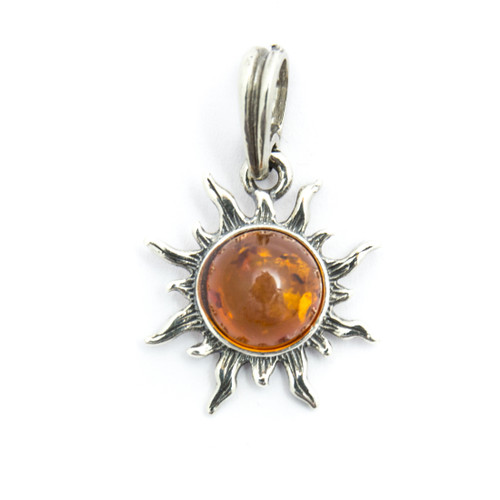 These sun shaped pendants are made from genuine Baltic Amber which has been placed within a sterling silver setting to form a sun shape. The Amber used is 'cognac' amber which is a lovely dark golden colour. Each pendant is completely unique and each has its own markings inside. Take a look at our pictures above to see the type of different variations there may be between pendants.

Please Note: This pendant does not come with a chain. Please click here to see our Sterling Silver Chains.

Size of Sun Pendants: These pendants are all approximately 1.5cm in diameter at the widest point (and not including the silver loop).

Associations & Properties of Amber
Amber is a fossilized tree resin (not sap) that has been widely used for hundreds of years as a healing agent in folk medicine, an ingredient in perfume, cosmetics, and as jewellery. It is often associated as a healing stone and is sometimes called 'The Stone of Liquid Sunshine', it has been popularly used for its calming, balancing and warming energy.

The Legend of Amber
According to Legend, the origins of Baltic Amber date back to a Lithuanian tale about Jurate the Queen of the Sea. The plots varies widely between different versions, however the most popular stories describe Jurate as an underwater Goddess; sometimes known as a Mermaid or Undine who lived in her beautiful amber castle in the Baltic Sea. It is said she ruled the sea and all sea-life, hence her name 'Jura' meaning 'the sea'. She fell in love with Kastytis a handsome fisherman; but Perkunas the Thunder God was angered when he found out that the immortal Goddess had fallen in love with a mortal man and furiously struck the Amber castle. The castle exploded into millions of pieces and it is said that this is why pieces of Amber now come ashore after a storm on the Baltic Sea.

Amber Jewellery Care Notes
When not in use, try to keep your Amber Jewelery in its original packaging or in a velvet pouch to keep it protected. If in need of cleaning, this can be done occasionally with a soft cloth to bring out its natural shine; don't use any harsh cleaning chemicals as this may damage it. Try to avoid using perfume and hairspray when wearing your Amber Jewellery and keep out of direct sunlight; natural amber can dull or discolour over time if exposed to this.

More About Amber
Amber is often referred to as the sun stone and has a personality that almost makes you smile when you hold it. Strictly speaking, it's not a crystal, but rather the fossilised resin of trees, which in some cases formed millions of years ago. As such, it has a strong connection with the past, and in larger pieces small insects that last flew a long time ago can sometimes be seen, captured in the resin and preserved forever.

The energy of amber is bright and cheery, so it can be good stone to have around if you need a burst of positivity. The stone is very light so is ideal for jewellery, and unlike other crystals, it isn't cold to touch. Amber has a long history and has been found in the burial sites of ancient peoples - this may be because it was regarded as having purifying properties.

More About the Symbol of the Sun
The sun is seen to represent the father and male principle, whilst in contrast, the moon signifies the mother and feminine principle. It's the source of heat and the bringer of light out of darkness and symbolises vitality, passion, courage and knowledge.

Just because it's generally referred to as a masculine energy doesn't mean that it's just for men. Both men and women have their male and female aspects. We all develop, and have the ability to access, them both.

The sun symbol features in many traditions, and some depict it as the symbolic centre of heart of the universe. Although viewed as a male principle in the majority of traditions, in Germany and Japan, as well as in tribes in some areas of the Celtic world and Africa, it was, for a time, viewed as female. The connection with the sun has led to many people worshipping its energy and vitality, with Peru, Mexico and Egypt being most famous for their sun cults.

As far as icons of the sun go, they are varied throughout the world. The Peruvian's depicted it in human form with a golden face, but it's also commonly shown as a gold disc, a rayed disc, a half-disc with or without rays and even as a wheel or spiral. Likewise, the colours used vary, from bright and golden yellow, to red, bronze and terracotta.