Benito Rael is a Native American of Tiwa and Southern Ute decent whose father was a Picuris holy man. The following interview was conducted before the Sun-Moon dance held in Manchester during July 2000 at which Benito Rael was the dance Chief.

The Sun-moon dance lasts for a period of four days in which participants dance backwards and forwards to a ceremonial tree in the centre of an Arbour. During this period they abstain from food and water. This is spiritual ceremony. (Interview with Brett Almond)

(Photos are taken before or after the Sun-moon dance in Manchester year 2000.)

Can you explain something about ceremony for those who haven’t come across it before?

The thing about ceremony is, you need to want to better your life.

In my brother's books (Joseph Rael - Beautiful Painted Arrow) he states - and what I was taught when I was growing up - that ‘work is worship’. In Picuris where I was raised, just to go out and irrigate your fields, or hoeing, or raising food we see as spiritual endeavours. This work for us is worship. So when you do a dance, the effort that you place in the dance, whether it be a Drum dance, Long dance, or whatever, the effort that you put in, you get out of it. If you have some issues that you want to work with, you work with those issues in the dance. You make your path forward or backwards. A lot of people go to the dance saying I’ve got a lot of trouble in this area or that area and they want to make them right.

When you’ve decided to do a dance it's commitment. And when you decide you want to do something you commit to it just like you do in a job. You say I want to do a Sun-moon dance. I’m going to commit myself for four years. And then when you reach that four your going to say “gee whiz”, so you might decide to make another commitment. What you are doing every year is you’re taking your brain and what you’ve learned to the dance and enhance that learning process in the dance and like I said ‘work is worship’.

Many years ago when the non-Indian heard about this way of worship they said, “What’s the trade?” - “Why are you dancing to this tree?” or, “Why are they dancing to this line of feathers”, or “Why do they do what they’re doing?”

A priest asked me once, “What is it in that tree?”

I compared it to his ceremonies. I said, “What is it sitting at that altar and going to church and getting calluses on your knees?”

He said, “Don’t you talk about it like that!”

I said, “When I go and do ceremony it is done in a manner that I know. Many years ago my Dad said there are so many directions you can go - you’ve got a sister who is a Methodist, a mother who’s baptised Catholic and a brother who’s Pentecostal, and another brother that’s a Mormon and they all chose what they wanted to do. And he said, “Son, one of these days you’re going to have to choose the kind of work you want to do.”

And what I’d seen in that vision when I was 15 years old **, that’s when I was told what I’m going to do. Now that I have been brought into this way of life I realise what that vision was. When you dance to that tree, that tree is the tree of life, that tree is a symbol that we use for dance, just as churches have symbols or procedures that you have to follow. It’s the same thing, it’s just a different way to believe and to bring yourself to spiritual life. And in this way, in a pure way, we worship.

(** When Benito was 15 years old he had a vision of many bad spirits and animals closing in on him from the side, and the only way out of this was to pull a piece of string that hung from the roof. When he pulled the string he was taken to the spiritual realms.)

To a lot of people this may seem a bit backward - a bit simple. People might be thinking you are missing the point or something. Can you explain to someone with these views?

There are different ways of making yourself right with the higher power. Some kneel for hours and hours because it is really good - and it’s the same thing as dancing until you wear down. That discipline always has a factor in how you do the dance. That discipline you learn from your parents.

They imposed religion on us. And you think “gee whiz” they were trying to take away our belief because it wasn’t their way and they didn’t understand it. A lot of it has to do with if you can understand this way. A lot of people say I don’t know how you can do what you do and receive spiritual light. So a lot of people need to experience this for themselves.

If you get a person and set them out in the middle of nowhere and there’s no means of food or water who do you think they turn to? That’s where this comes from.

When you’ve reached that last bit of water and you are wondering where the rest is going to come from, then you come to realise that without the guy up stairs, Great Spirit, Wah Mah Chi, God, or whatever you want to call it, you wouldn’t be where you are today because he’s the only one who gives us this divine calling as you would say.

So, it’s all a matter of preference. Some people don’t understand it at first. So my brother wrote his books so they could read and he could explain what all this stuff is. So therefore when the time comes to right your way of believing you can use the dance. It doesn’t have to be a Sun-moon dance or a Long dance or a Drum dance. You can give thanks through many different dances. The way I was raised the animals were our bothers, and we protect them, and in return they give themselves to us. They were gifts. So sometimes we do animal dances.

We are all raised in a society where things are cut and dried - this is what you believe in and that is it, and there is no other avenue. A lot of people who do this work are the clergy. I’ve had clergy come. They say I’m father so-and-so, I’m sister so-and-so, and I’m Reverend so-and-so.

I say, “Well what are you doing here? You don’t need this dance.” 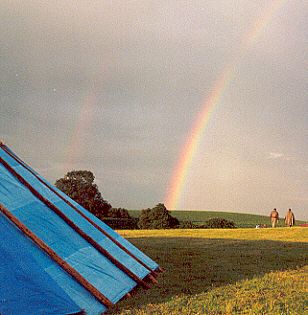 We have preachers and lawyers and people of high standing that are doing this work because they’ve come to a point where the way they were brought up and taught is not exactly what they want. So they’re looking for something different. This is something they do for themselves for their own spiritual strength.

It’s like that festival that is on in Holland right now. They are having a Revival that is lasting four days or a week or so. People go there and have a Revival. That’s what you could say this could be. It’s a Revival for you to make yourself right in you.

You could say “I’m going to a Native American ‘traditional / non-traditional’ Revival where everyone can participate if they want to. And maybe they fast and through prayer they receive.

The Native Americans, the South Americans and the Greeks used to do it and they just got away from it. Christianity changed a lot how we perceive this. If they would have understood it many years ago then it would have been different. If they’d have understood it then maybe there’d be more people interested in it. Interest comes with the knowledge. Like I said, my brother wrote those books to give the knowledge to the world and through that people have dedicated their lives to this kind of work.

Because this is a non-traditional dance people don’t have to feel excluded?

Everyone who wants to enhance their way of believing can do it this way because there is no certain set pattern, you just go to an Arbour and you do it in a circle of light and you do it in a line, to where you can focus on what you want. That’s what the dance is about - focus and making a commitment.

Joseph Rael in his book “Ceremonies of the Living Spirit” says:

'I don’t teach Picuris (Tiwa) religion or Ute religion. I teach what has come to me from my visions. I spent fifty years becoming a visionary, so that what I do in ceremony comes from the Source and it works. I don’t know how these ceremonies work or why they work, but they work. People who criticize me for sharing ceremonies with non-Indians don’t understand that the ceremonies I am doing are not traditional or tribal.'

'I believe that this is a way of bringing people who really want to know the Spirit into the context of the Spirit, so that they will know their own inner source and how to bring that forth in their lives in an active way and awaken their own spiritual awareness.'

Ceremonies in UK in the tradition of Joseph Rael, Beautiful Painted Arrow:

Sun/Moon Dance, near Edinburgh, Scotland
Normally held towards the end of July. If you would like further details, or are interested in helping please contact Stella Longland on: stella@peacechamber.co.uk