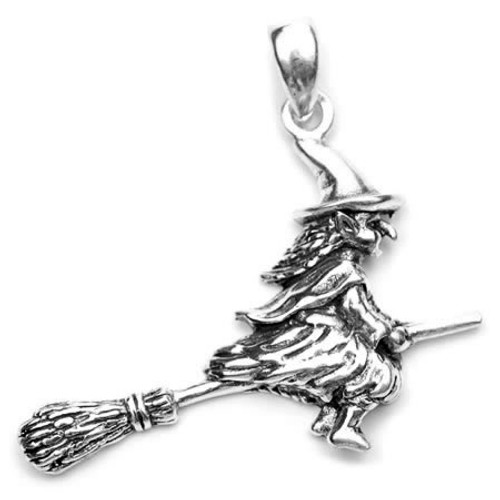 Dimensions: 30 mm from top of loop and 35 mm at widest point

More About the Symbol of the Witch
Being a witch and practicing witchcraft is a way of life, not a religion. It's based on a belief in nature and the desire to follow the Old Ways. Witches recognise the divine within themselves and have many strands of belief and tradition. They're ordinary people, not scary beings with strange, mystical powers, and have the same abilities as everyone else. However, they encourage the development of extra skills, such as spells, healing and psychic abilities, and it's these activities that are often misconstrued.

Being a witch hasn't always been an easy task. From the 13th to 18th centuries in Western Europe, witches were regarded as being people who misused supernatural powers. They were often seen as servants of the devil, with a scary and harmful way of life. Witches became persons to be fearful of and many suffered the trauma of being burnt at the stake for their beliefs and abilities. When the witchcraft hysteria was in full swing, witches got blamed for every unexpected occurrence, from crop failures, to droughts, floods, accidents and numerous natural disasters.

Witches beliefs are diverse and depend on the particular tradition they follow. However, some common principles include:

The three fold law - that one's actions return three times over. For example, an act of kindness produces three times much as kindness.

The idea that everyone is responsible for his or her own actions.

Just as with other beliefs, witches have their own special celebrations. There are eight major events in the year, termed sabbats (Beltane, Litha, Lammas, Mabon, Samhain, Yule, Imbolc and Ostara).

Despite many misconceptions, witches don't fly broomsticks and aren't always accompanied by black cats, although many of course do choose to have furry feline friends!

More About the Symbol of the Broomstick
Broomsticks have been traditionally associated with witches and images depict them flying high through the sky on their brooms, often with their black cats curled up beside them.

As quaint as the image is, witches (and certainly not 21st century ones) don't ride broomsticks. In fact, the concept is thought to stem from a fertility ritual carried out by pagan women. They used to jump over a plant whilst straddling a broomstick to try and encourage the crops to grow tall and strong.

It's also likely that the idea of broomstick flying came about after mentions of astral travel and out of body experiences, where an aspect of the body 'flies,' as some witches do partake in exploring such experiences.