I have read countless books over the years of the culture of these people and seethed with rage at the atrocities that almost wiped them out during the 19th century. However, they were most certainly not wiped out, and continue to this day to perform the same ceremonies that their forefathers did before them. Lakota is the correct name for these people, the word Sioux is a French rendering coming from an Ojibwa (Chippewa) word for their enemies "nadouessioux," meaning "little snakes". The Lakota people of today primarily live on the Rosebud, Pine Ridge, Lower Brule, Standing Rock and Cheyenne River Reservations of North and South Dakota.

The Lakota are made up of seven bands: Oglala (dust scatterers), Brule (burnt thighs), Hunkpapa (end of the circle), Miniconjous (planters beside the stream), Sihaspapa (or Black feet tribe, different from the Blackfoot tribe), Sans Arc (without bows), Oohenupa (two kettles).

Lakota people are also called Teton Sioux or Titunwan meaning "who live on the prairie." The name recalls the migration of the tribe from the woods of Minnesota to the Black Hills of the Great Plains territories, where they learned to live with the buffalo. On the wide open lands the buffalo, or Tatanka, provided for both body and soul. Hunters ate the fresh liver of the newly killed buffalo, and boiled, roasted and dried meat nourished the entire village. The Lakota used buffalo hide for clothing, tipis and shrouds for their sweat-lodge. They made saddles, tools and weapons from the bones. They carried water in buffalo bladders and used buffalo droppings for incense and fuel. Every part of the animal served a purpose, down to the hooves, which were made into glue. The Lakota would not dishonour Mother Earth by wasting a single portion of Tatanka’s precious gift.

Kinship is central to the Lakota way of life. Courage, fortitude, wisdom and generosity are among the celebrated virtues. The Lakota learn these traits from their Elders and prove them in their daily lives. Every act and judgement is considered in terms of duty and benefit to the extended (Tiyospaye) family, which often includes hundreds of people. The worst insult a Lakota can give is to say, "You live as if you have no relatives."

When the term "relatives " is used, it refers to all living things, from the tallest tree to the tiniest ant, and the Lakota believe that we are "all related", no matter what colour or creed.

Ceremony played a very important part in their culture, and still does today. The smoking of the Pipe is very sacred, and the story is told of how the White Buffalo Calf Woman gave them this Pipe and showed them how to use it in ceremony. Other ceremonies that are still practised today, are Sweat Lodges, Vision Quests, Sundances (only performed out in the open again since a few years ago) and Healing ceremonies. I have had the honour of sitting in the Sweat Lodge with these wonderful people, have smoked the Pipe with them, listened to the drumming and songs sung in their native tongue, sat in a healing ceremony performed by a wonderful old Medicine Man named Basil Braveheart. I have also been honoured by being invited to attend a Sundance held in the southern Black Hills this June, which is on the land that the wild Mustang horses roam. I have visited this site and stood before the Cottonwood tree adorned with the bundles of offerings to Great Spirit, from last years ceremony. This will remain until the next ceremony is performed, when a fresh Cottonwood tree will be cut down for the new ceremony, which takes place over four days.

It is because of the love for these people that I have, that I am trying to help them live a better life. They truly are a forgotten people, and my new found friends belong to the Oglala tribe, ancestors of Chief Crazy Horse, Red Cloud and Black Elk but to name a few. The Oglala are the largest tribal group in the Lakota Nation and live on the Pine Ridge reservation. This is located in Shannon County in southwest South Dakota, on the Nebraska border. It is the poorest county in the United States and the people truly live in "Third World" conditions. The saddest thing is because the land where they live is so vast, huge tracts of barren land intersected by the sacred Black Hills and the Badlands, people do not seem to realise that these people still live here. Many people I have spoken to assume that they were all wiped out in the wars of the 19th century, but this could not be further from the truth! They still live in a beautiful but a hostile and unforgiving land, no longer able to live as their ancestors did. 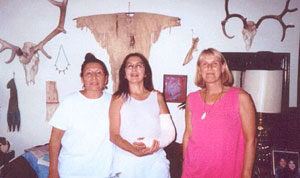 On Dec. 15th 1890 when Chief Sitting Bull was murdered, and shortly afterwards on Dec. 29th 1890 Chief Bigfoot and 300 of his people were massacred at Wounded Knee, the people no longer had the numbers, or the will to fight the White Man, or Wasicu, and had to resign themselves to living on reservations. The U.S government have broken, and continue to break every treaty made with the Lakota people, and this should not still be happening to such a Spiritually advanced people, not in this day and age.

Pine Ridge Reservation is approx 11,000 (over 2 million acres) square miles in size. It is divided into nine districts: Eagle Nest, Pass Creek, Wakpamni, LaCreek, Pine Ridge, White Clay, Medicine Root, Porcupine, and Wounded Knee. It is home to around 40,000 persons, 35% of which are under the age of 16.

The population is steadily rising, despite the severe conditions on the reservation, as more and more Oglala return home from far away cities in order to live within their societal values, be with their families, and assist with the revitalisation of their culture and Nation.

Recent reports point out that unemployment on the reservation is between 85% to 95%.

The list is unending as to the things that this still noble nation need, yet they have continued to survive! They still

continue to follow their traditions as best they can. They still perform their ceremonies, pass down the stories to their children and grandchildren, honour the four directions and pray to Great Spirit on a daily basis. They still give thanks to our Mother Earth for sustaining them, to Grandfather Sun for giving them warmth and light, and for helping making things grow, and they still continue to smile and retain their great sense of humour. They truly are a magnificent race, and I am so proud and honoured to have walked among them, and to be able to help them in some small way by raising funds here in England to buy Propane fuel for a few families to get them through the harsh winters. I hope to be able to do more for these wonderful people as time goes on, and I have written this article to try and spread the awareness that "our relatives" are still alive and kicking and need our help. I think that we all owe them that much!

MITAKUYE OYASIN
(For All My Relations)